Saturday - January 28, 2023
On Dubuque
Your One Stop Site For Everything Dubuque, Iowa
Home › Columns › Sean Leary › Netflix’ ‘Social Dilemma’ Is A Dark, Must-See Mirror Into Our World

There are very few shows you can deem “must see” anymore, although not as much due to their quality, as due to the fact that not many shows can truly be described as being targeted for a wide audience anymore.

We live in a world that’s become increasingly fragmented and subdivided, and invariably there are few things upon which the vast majority of the population can agree. Entertainment used to be the great uniter of the people. When television began to rise to prominence in the ‘50s and ‘60s, cultural touchstones were based upon events it showcased.

The Beatles on Ed Sullivan. 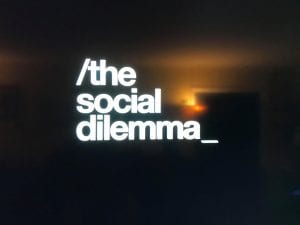 Even going beyond the pop cultural sphere, people of a certain age can remember uniting to watch the Berlin Wall come down, OJ Simpson’s Bronco chase, and the constant coverage of 9/11.

Part of the ubiquity of those experiences was due to the paucity of selections available. At one point, strange as it may seem to anyone born beyond the year 2000, there were only three major television networks, and even for my own generation, Gen X, we grew up with four if you add in PBS, and a couple of extras like WGN and two or three UHF channels if you grew up around Chicago or New York as I did. Even when Fox debuted in the late ’80s, it was seen as a novelty, much like the CW and UPN a decade later. So you didn’t have much choice in the matter, and that led to greater commonality in regard to taste, opinion, and community of experience.

For better or worse, that world has been flipped on its head with the advent of cable TV, and then, the Internet, which brought a vast array of choices into people’s lives. But with those choices came greater divisions, as there were few touchstones upon which we could all land, and all agree upon. The ratings numbers for the top television programs and radio stations have been steadily diving for years as people, given a plethora of choices, have become more divided than ever in their individual preferences.

This seems a trivial thing, and you may wonder why I’m starting off this column this way. But think about it: There was once a time when our differences in politics, religion, and other hot-button topics could be overcome by talking about the pop cultural touchstones we had in 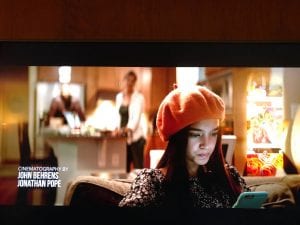 The rising number of teen suicides, depression, and other mental health issues is addressed in ‘Social Dilemma.’

Now, we’re more divided than ever. Get-togethers are dominated by people sitting around disappearing into their own worlds on their cell phones. And even when those phones are temporarily banned for the ostensible sake of conversation, the times are strained, as common topics of conversation seem harder to grasp.

The practice of not only widening these gaps, but manipulating and monetizing them is the subject of the most provocative and hard-hitting film of the year, one which I wholeheartedly encourage everyone to see. The movie is called “The Social Dilemma,” and it’s currently available on Netflix.
[ad]
“Social” begins by rolling out its cast of real-life characters – a veritable who’s who of behind-the-scenes power brokers in social media and internet sites over the past two decades. Every platform from Facebook to Twitter to Google and more is represented by multiple employees, all of whom describe in detail how those platforms began, or at least how they began with those platforms, with altruistic intentions of literally uniting the world, only to see the opposite rapidly take place as the algorithms of those sites were used to divide and subdivide groups and create pods of opinion reinforcement to cultivate viewers as attention chattel sold to advertisers.

They go into how facts are largely ignored in the interest of keeping people hooked and locked into dopamine surges created by rousing their emotions, and stoking conflicts to increase screen time, allowing them to sell more advertising and addict their customers.

The result has been an online society divided along stark lines to increase the delineation of demographics for ad sales. In addition, it’s also 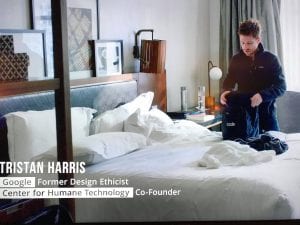 Tristan Harris is one of the social media experts interviewed extensively in the documentary.

stoked insecurity, fear, and the sense of lacking within people, which only makes them more suggestible and ripe to be sold things which are marketed as the answer to their needs. The more desperate and wanting someone is, the more they seek something to assuage that. That in essence is the life’s blood of advertising new products and it’s become all the more starkly achievable given the sophistication of the artificial intelligence systems running popular websites, allowing them to quickly build a personality profile of users and prey upon their weaknesses.

The film shows how the sites very intentionally and concertedly do that, and also how they can be weaponized to manipulate public opinion and even help overthrow governments and cause social unrest. It also shows how that culture of incompleteness and need being created has caused record depression and suicide among young people who are most tied into the networks.

In all, it’s a chilling, fascinating, and thought-provoking film, and one that truly fits the description of must-see, given the ubiquity of the internet and social media in our lives, and our desperate need to understand its true motives and how to disengage and put it into perspective to reclaim our own ability to think and live independently.

Although certainly ominous, the documentary ends on a hopeful note. Each of the people involved, all of whom has been intimately entwined with the technology inherent to the medium, talks about how it can be a force for good, and what changes can be made to tip the scales back in that direction.

But the first step to solving a problem is to identify it, and “The Social Dilemma” is a vital and important first step in doing that. I highly, highly recommend that anyone involved with social media in particular watch it, and consider the message it has to offer.

Sean Leary
Sean Leary is an author, director, artist, musician, producer and entrepreneur who has been writing professionally since debuting at age 11 in the pages of the Comics Buyers Guide. An honors graduate of the University of Southern California masters program, he has written over 50 books including the best-sellers The Arimathean, Every Number is Lucky to Someone and We Are All Characters.
See More Articles From Sean Leary
Tagged: